Over the years I have built up a small Skipper collection.  Skipper was my first 'Barbie' doll and I have to say I preferred her to Barbie.  There is something sweet and innocent about these early dolls. 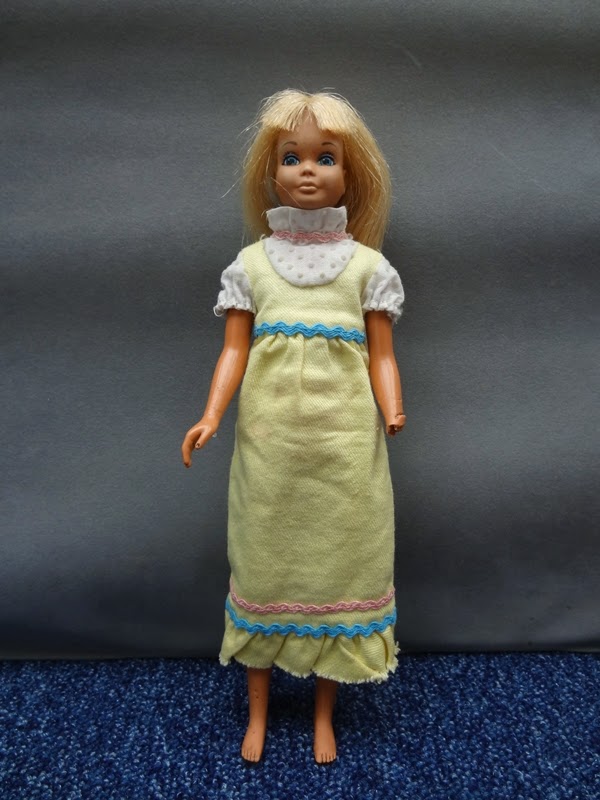 She has a suntan skin with long straight blonde hair, a fringe with twist waist, bend knees and would have come in a two piece orange swimsuit (plus blue towel & sunglasses) 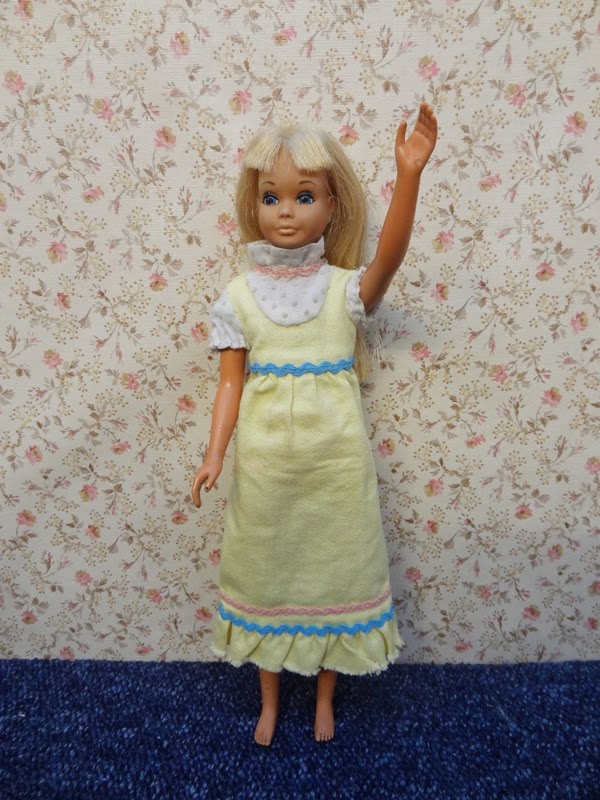 Happy with her new arm!

I have two more Malibu Skippers

This one is wearing her original two piece swimsuit. 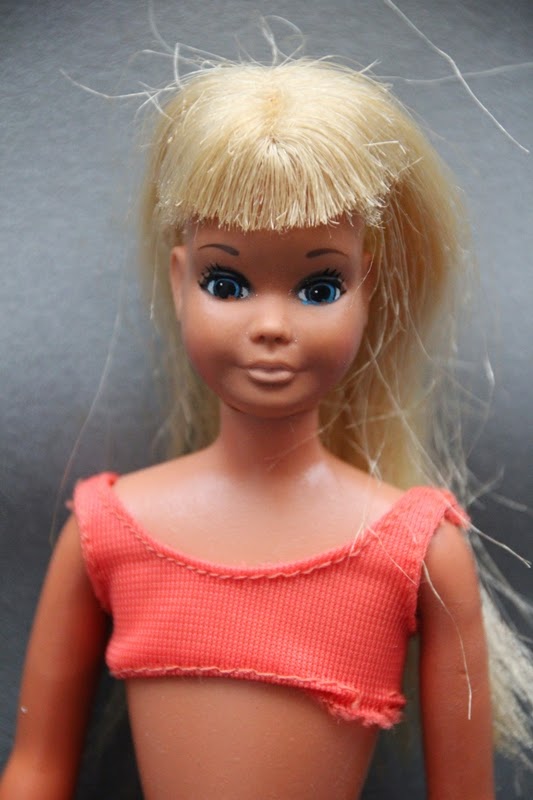 This one is wearing a one piece blue suit - I haven't been able to find any reference to this piece as of yet. 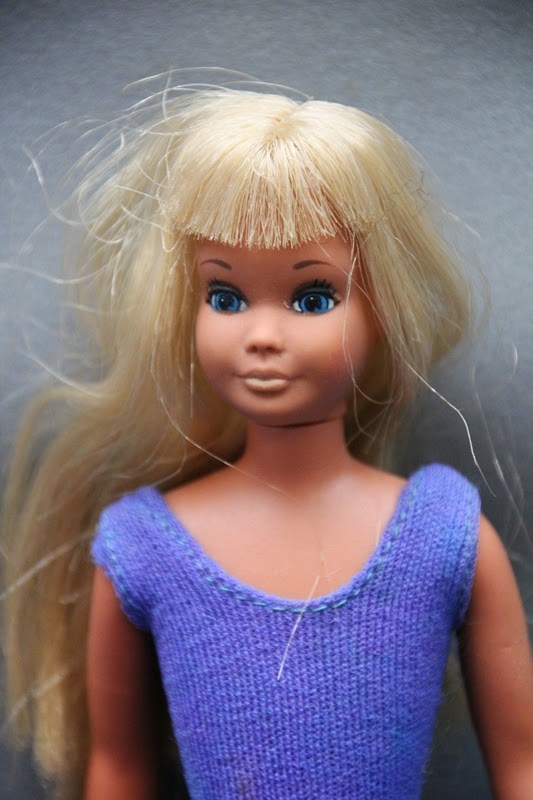 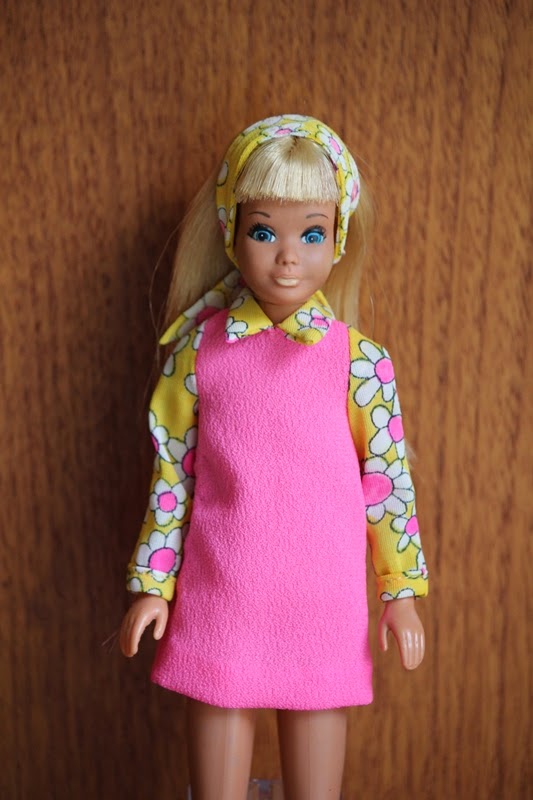 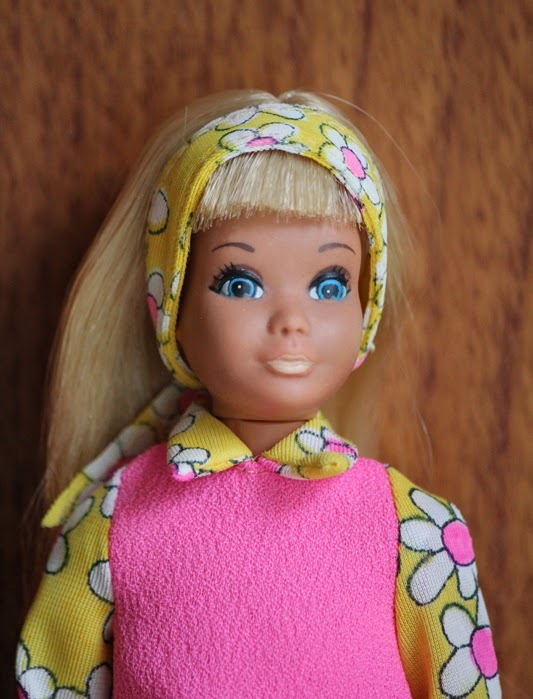 This Skipper has hair at the sides which pulls back to be clipped into a pony tail. 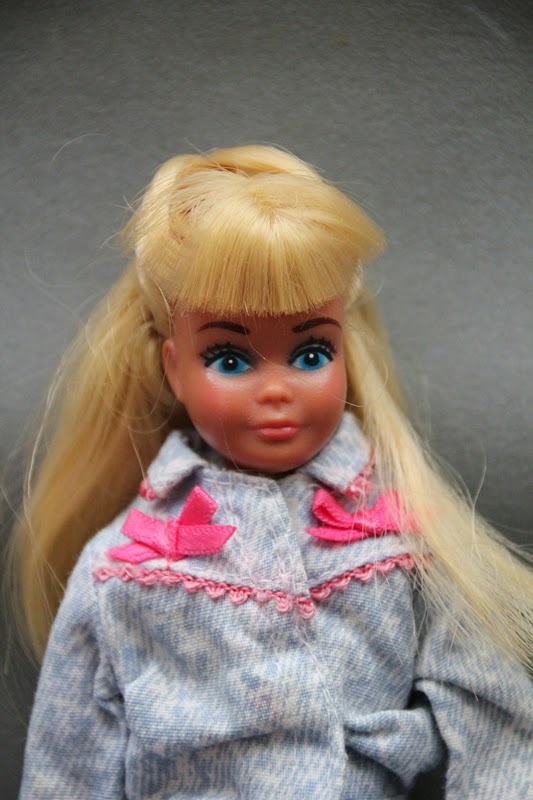 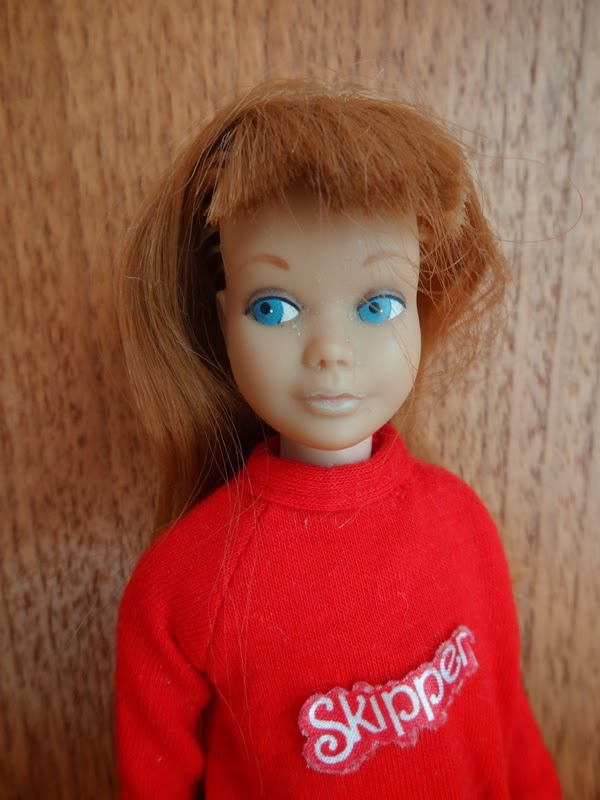 This Skipper is one of the first Skippers, from 1964 and is number 0950   She has painted blue eyes, coral lips, straight titian (auburn) hair with a fringe and straight legs.  She would have come wearing a one piece red and white cotton swimsuit with a brass headband, red flat shoes, a black wire stand and a white brush and comb. 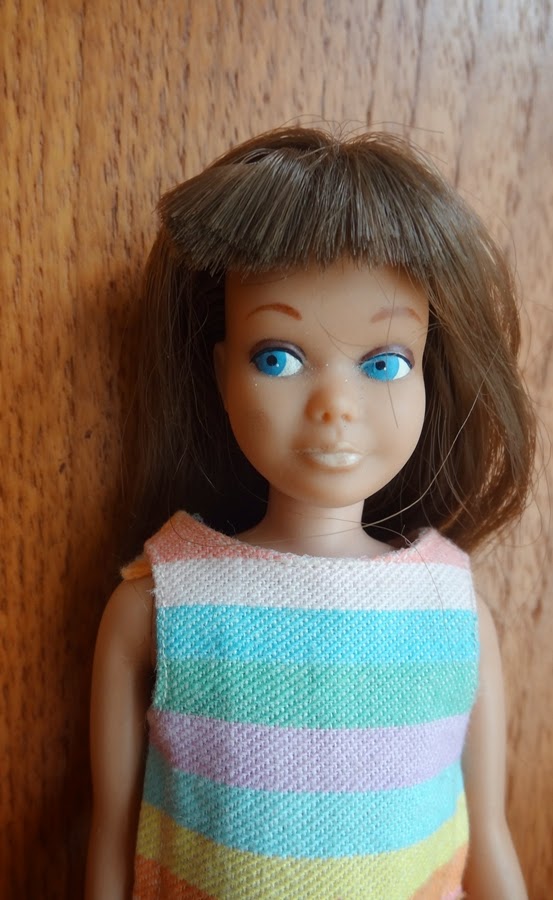 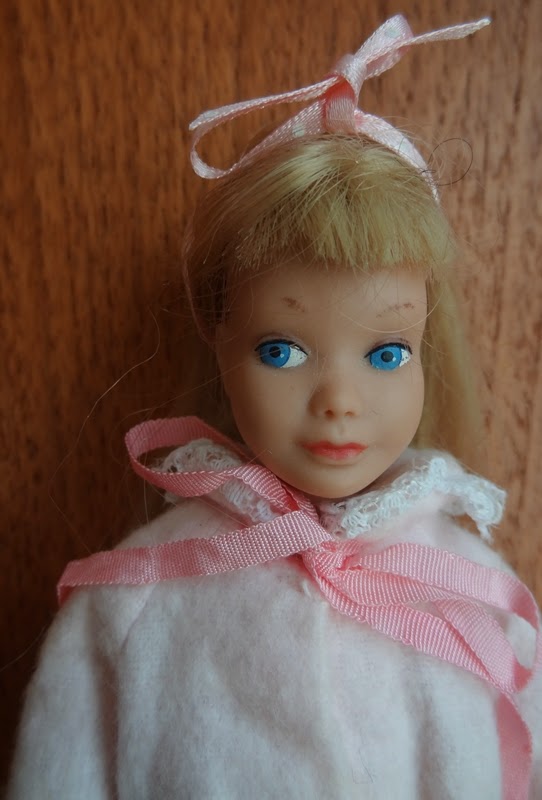 She is wearing '1909 Dreamtime from 1964 - 1965  The complete outfit is white with pink polka dots pyjamas (top & bottoms), pink flannel robe with cat appliqué on the pocket, a blue princess telephone, a red telephone directory, a blue felt cat and dark pink felt slippers.

Next up is my 1105 Twist N' Turn Skipper from 1969.  She has full centre part with two sausage curled pig tails hair do.  She has brown hair, rooted eyelashes and would have come wearing a one piece red orange checked with solid orange bottom swimsuit. and orange hair bows. 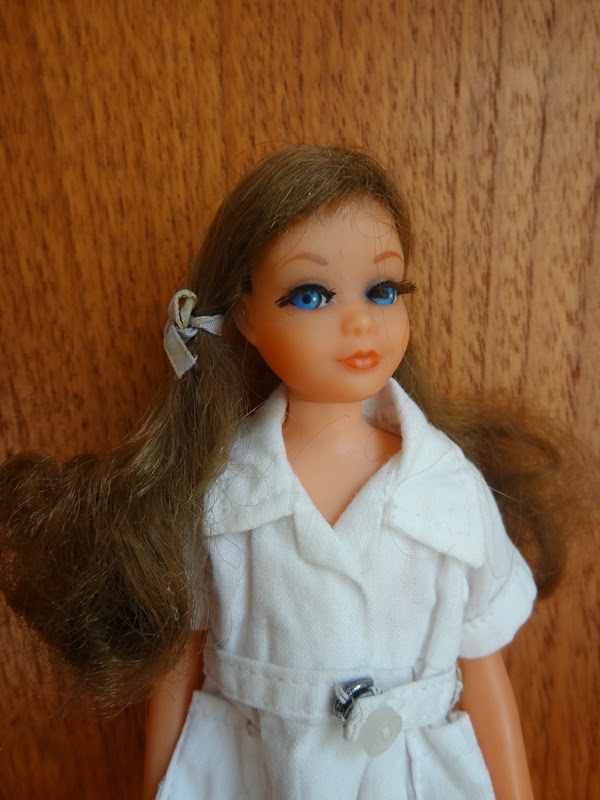 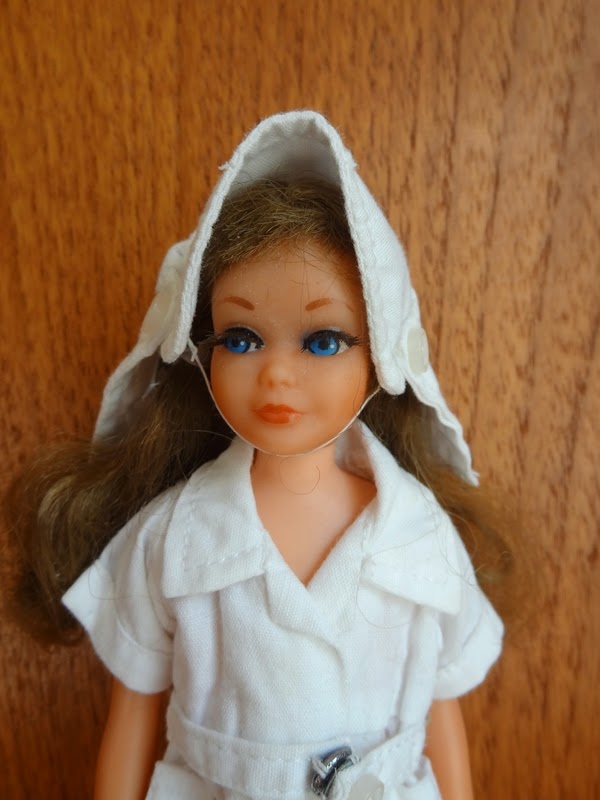 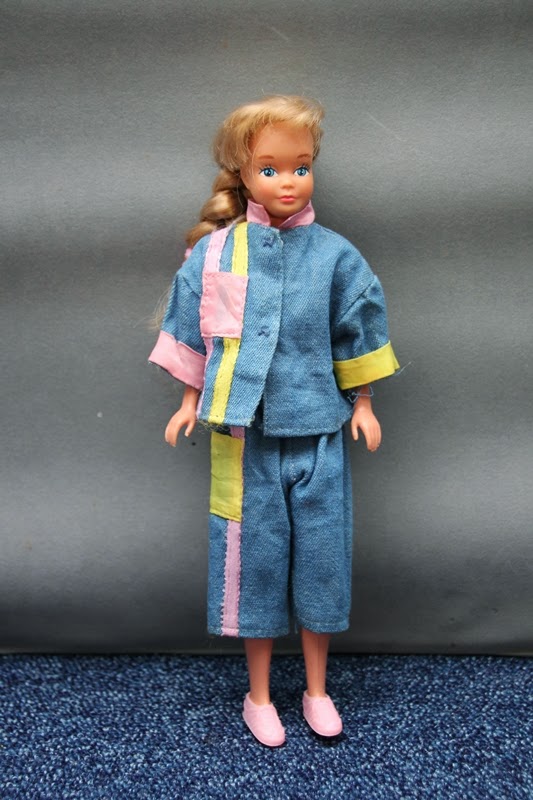 This Skipper is a newer doll.  She is just marked on her back above her waist  © Mattel, Inc. 1967

I believe she is a 'Great Shape Skipper' from around 1984 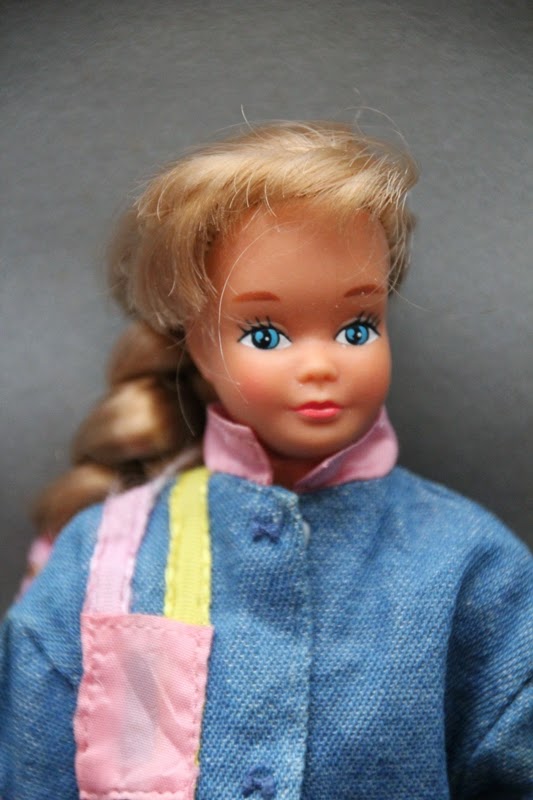 One of the more unusual and controversial Skippers is 'Growing Up Skipper' (Number 7259) who was marketed as 'Two Dolls in One for Twice as Much Fun'    By rotating her arm she grows taller and develops small breasts and thus transforms from a young girl to a teenager!  She was sold between 1975 and 1977 and also had a friend 'Growing Up Ginger'.  Included were outfits for both the girl and the teen versions.  My Growing Up Skipper is wearing her original outfit minus the shoes.  Her full outfit would have also included a red headband, blue scarf, red socks, red flat shoes, white platform wedge sandals, two red and white plaid skirts, one short (which mine has) and one long. 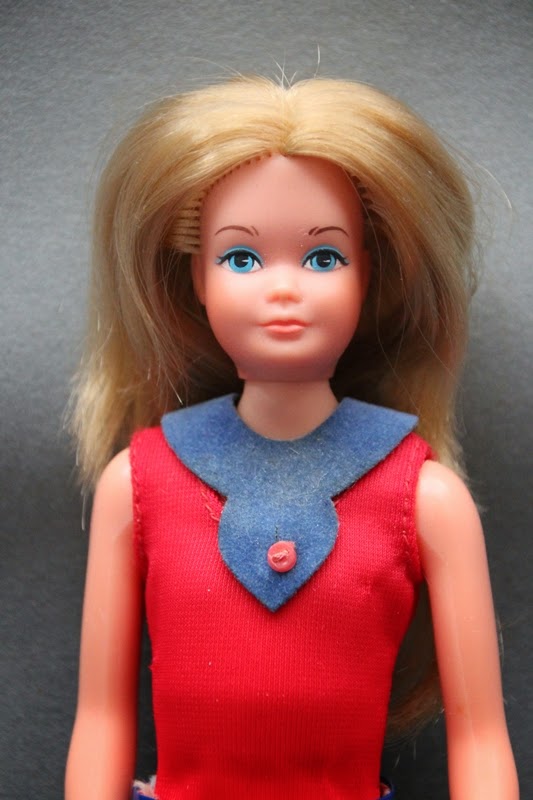 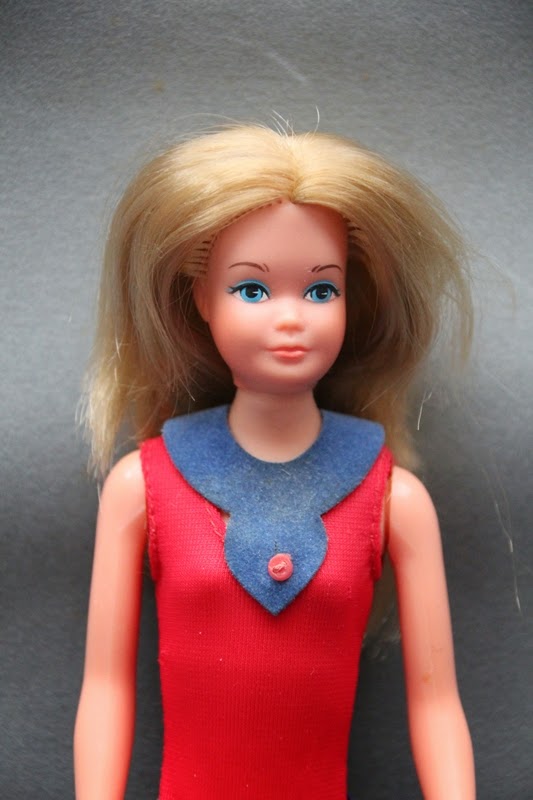 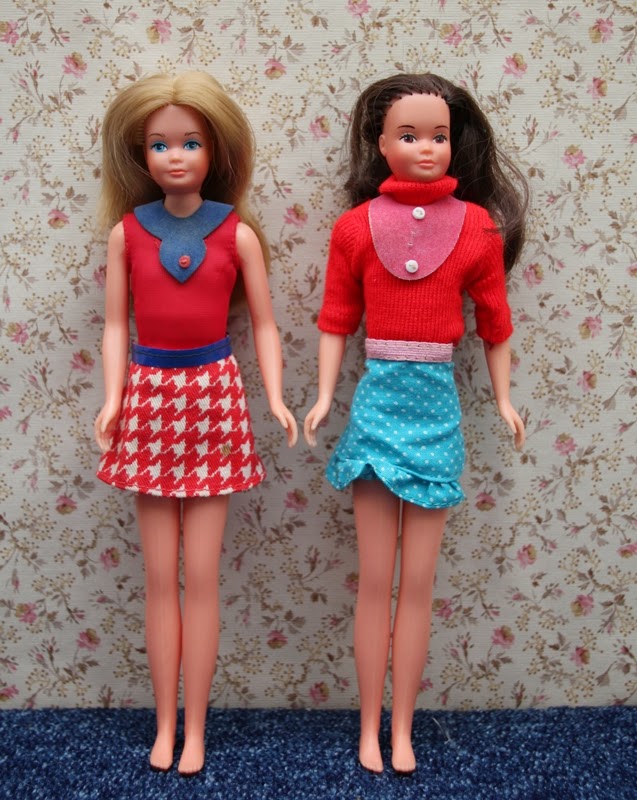 Growing up Ginger with Growing Up Skipper. 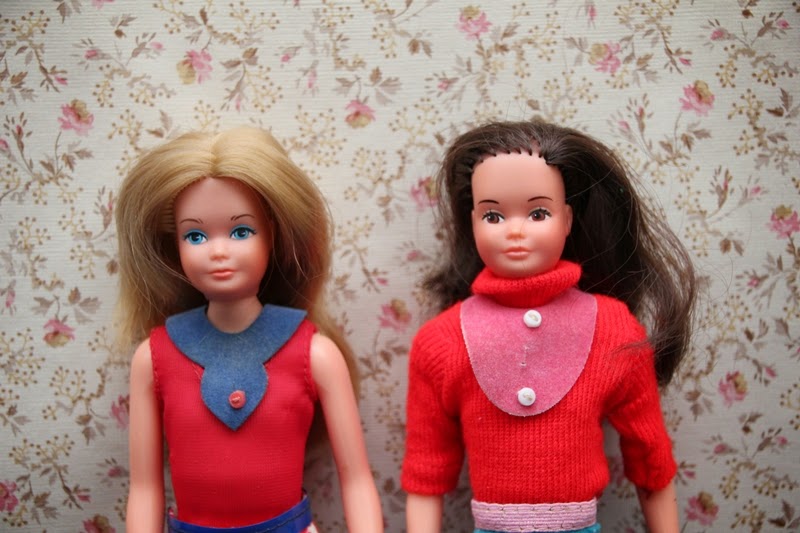 Not sure which Skipper this one is. 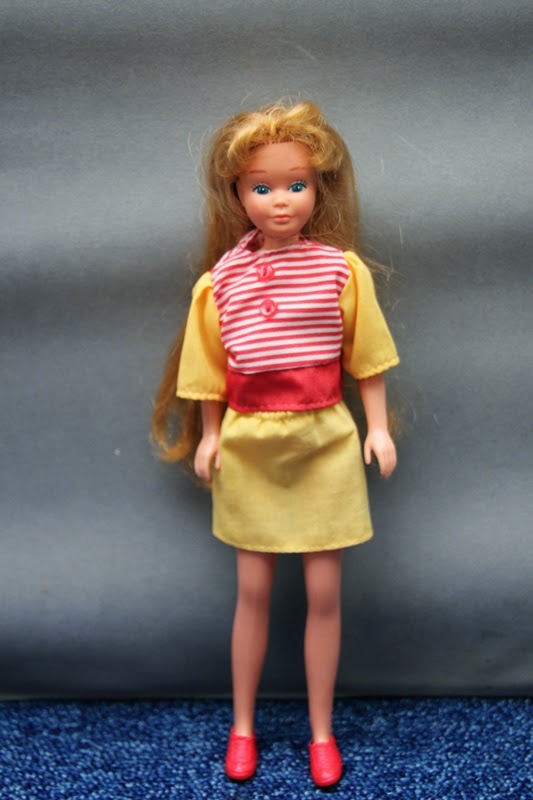 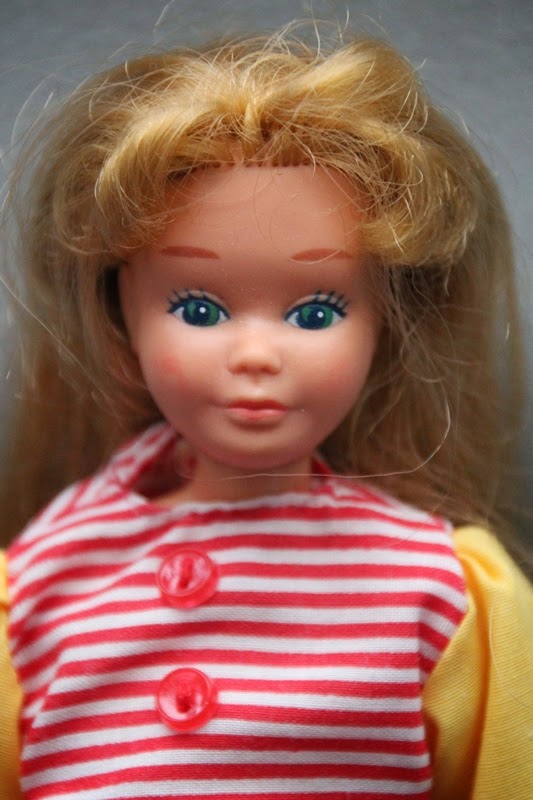 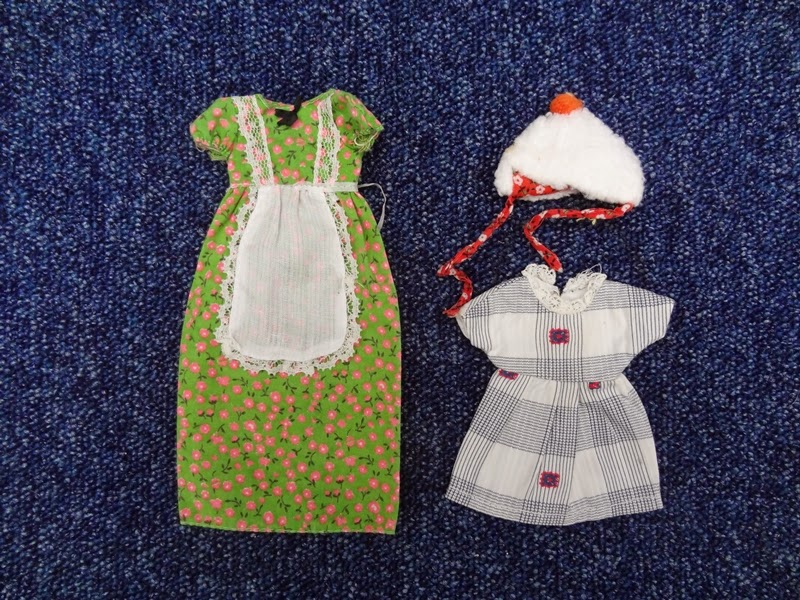 So far I have only been able to identify the dress which is: